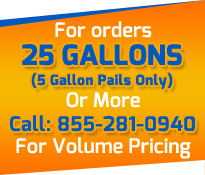 Q: Why is EPDM liquid rubber the best choice for roof leak repair?
A: EPDM rubber has been used in sheet form for more than 30 years. It is probably the most durable roofing product ever developed. Liquid Rubber is nearly identical chemically to sheet EPDM, but with the distinct advantage of being liquid. EPDM is unique among rubbers in that it is ultraviolet and ozone stable; it has superior water resistance; and it can tolerate extreme cold, as low as minus 62 degrees Fahrenheit, as well as heat exposures exceeding 300 degrees Fahrenheit.

Q: What Is EPDM Rubber?
A: EPDM is a synthetic rubber polymer made from ethylene and propylene monomers. It was developed in the early 1960s and is used in radiator and steam hoses, freezer gaskets, tires, roofing membranes, and aircraft seals, to name only a few applications where EPDM is superior to other materials.

Q: What is EPDM Liquid Roof / Liquid Rubber?
A: Liquid Roof is a liquid version of EPDM rubber. It cures by chemical reaction at ambient (ordinary) temperatures to form a flexible rubber membrane. A pre-measured catalyst is added to the rubber compound before application. The liquid form makes it possible to apply EPDM rubber to many materials regardless of their shape.

Application procedure
1) Incorporate the supplied catalyst using the drill and mixer shaft by following the directions on the label. Let stand at least 1/2 hour before using.
2) Apply the masking tape to the perimeter of the roof or wherever straight edges are desired. The tape can also act as a catch basin for sags if only one edge is attached to the roof and the rest is formed into the shape of a gutter.
3) Pour some material on the roof and use the squeegee to distribute over the surface. Follow with the roller to even out the wet film. The product will self-level. Use the brush around vents, ladder, and antenna. Brush and roller marks will disappear when sufficient material is applied. Work from front to rear.
4) Masking tape should be left on until the rubber is solid enough to be touched.
For Further Detail Click Here

Q: What effect does high relative humidity or freezing temperatures have on Liquid Roof / Liquid Rubber?
A: Liquid Roof / Liquid Rubber can be applied under high humidity conditions as long as the roof is dry and its temperature is above the dew point. The solvent evaporation is governed by temperature only and is not influenced by relative humidity. If the temperature drops below freezing after it has been applied, no damage will result. The rubber will slowly stiffen as the solvent evaporates and will begin to cure when the temperature exceeds 55 degrees Fahrenheit. The ultimate physical properties of the EPDM rubber membrane will always be the same, regardless of the length of time needed to reach the full cure stage.

Q: How much time is available to work with it after the catalyst has been mixed in?
A: On a hot day (above 80 degrees), the working time will be approximately four hours until the rubber becomes noticeably thicker and more difficult to apply. Working time is considerably longer at lower temperatures. The rubber will thicken faster in direct sunlight. When liquid level is low in the container, scrape liquid from the sides. Put the container in a cool place when longer working time is needed.
If the material is refrigerated (below 50 degrees) after the catalyst is added, it can be saved and used even weeks later.

Q: How do I do wintertime maintenance?
A: Roof repair seems to come to a grinding halt during the winter months. Some people grab the tar and plug the hole, so to speak. With tar products, it is simply a matter of plugging, since asphalt cannot stick to a wet roof/surface. Asphalt is made from petroleum and animal pigment. When the petroleum evaporates, the asphalt will begin to crack. During the hot summer months, it melts, sticks to your shoes, and evaporates. Asphalt emulsions are cheap but end up cracking in the same way. White coatings purchased in stores are also generally cheap and simply will not dry during the cold winter months; and you can experience substantial wash-off during application on your roof.