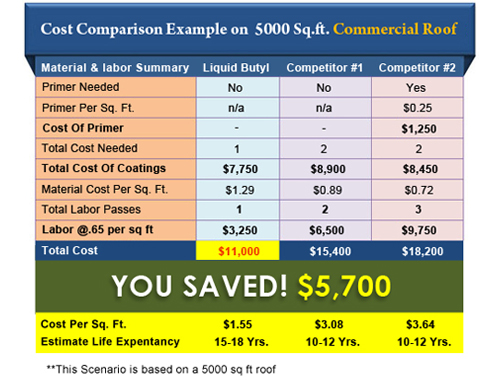 For years the roofing industry had been looking for a way to develop an EPDM product based on a two-step curing process with the ability to “cross link” the EPDM polymers at ambient temperatures. In 1990, a polymer was manufactured and as a result the first and only Liquid EPDM Rubber was developed. Today, with over a 25 year history of success Liquid EPDM rubber has steadily been increasing its popularity around the world for very good reasons.

Liquid EPDM is significantly similar to the sheet version, but with a few exceptions. It will not chalk after eight or nine years, and the method of “curing” or drying provides an airtight, seamless membrane. The process of how the EPDM Liquid Rubber dries or hardens is called a free radical polymerization. In polymer chemistry, polymerization is a process of reacting monomer molecules together in a chemical reaction to form polymer chains or three-dimensional networks. The catalyst is peroxide based and it provides the best properties to ensure a proper cure as well as a very long pot life (working time to use the product). This is another reason it has been marketed over the years as a do-it-yourself product.

EPDM Liquid Rubber has excellent weather-ability, is not thermoplastic and can withstand high temperatures (up to 300° F). It can also remain flexible at very low temperatures (brittle point is –62° F) and has resistance to acids, alkali’s and polar solvents. Below outlines the results of laboratory testing on various chemicals along with their concentration percentages.

It can even withstand total water immersion indefinitely. There are numerous benefits which have distinguished Liquid Rubber as the roof sealant of choice for the past 25 years. You will not find another Liquid EPDM anywhere in the world. This is a 100% true EPDM material. Due to its special formulation it will not chalk like the sheet version. Please refer to our USES PAGE for approved application surfaces. Liquid Rubber may be applied to 95% of roof types without the use of the ProFlex Primer and effectively extend the life of an existing roof for a significant number of years.

Compatibility and performance should be the main criteria in choosing a liquid roof coating. The following comparison lists the pros and cons of various types.

There are many types of roofing materials on the market today. They range from metal decking, shingles, built-up systems, a multitude of single ply membrane systems to single and two component liquid coatings. Each one has a particular cost and performance function that distinguishes it from the others. Some are sophisticated high-tech products commanding a premium price and others are the low-tech but widely used materials. The former requires more skill to install and offers a longer life expectancy than the latter, but regardless of what roofing material was selected there is a high probability that some failures resulting in leaks will occur. The failures could be the result of improper installation, material failure, or a recent roof penetration that was not adequately sealed.

The single ply roofing membranes such as Hypalon and some Thermoplastics were thought to be the “end-all” solution to leaking roofs. However, experience over the past twenty years has proven otherwise. These membrane systems have shown themselves to be only as good as the integrity of their seam seals. Seams are bonded with adhesives or in the case of the thermoplastics, fused with heat. Both of these seam seal methods require the contact surfaces to be clean and of the same dimension to prevent wrinkles. Sloped roofs can tolerate some imperfect seam seals but flat roofs that develop ponding water cannot. It is assumed that the probability of a roof developing leaks will be in direct proportion to the number of joints and seams.

Liquid Elastomeric coatings were developed to repair leaks and extend the service life of existing roofs. These products will be one of four generic types for ambient cure: 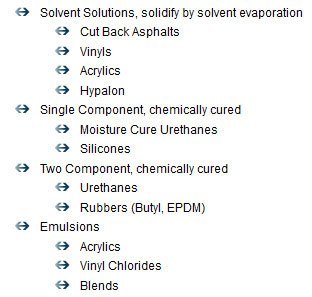 Nearly all of the liquid coatings could be used on sloped roofs as long as they were compatible with the substrate. Flat roofs have an additional requirement – the coating must be able to withstand ponding water. Figure 1 shows the relative water vapor transmission of several polymer types. 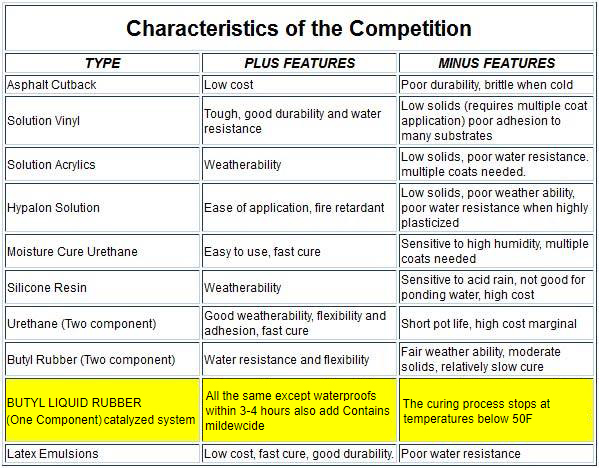